Oswald "Otto" Rocket is the lead character on Rocket Power, and is voiced in English by Joseph Ashton. Otto is an 10-year-old boy living in Ocean Shores with his older sister, Reggie, and their widowed father, Raymundo. He is a skilled, prodigious and highly competitive athlete who has won numerous competitions in skateboarding, surfing and snowboarding. He's also very handy with a bicycle, with rollerblades, and is captain of the youth league street hockey team he shares with Reggie, his best friend, Twister, and the newcomer, Sam. The given name Otto is derived the old Germanic language meaning "wealth."

Some parts of a deep backstory can be surmised about Otto from the observable facts: he would have been born about a decade before the series' time frame started to Raymundo and Danni about a year or so after the young couple had Reggie. Danni passed away probably before Otto turned three, as from the small snippet in Otto Hangs Eleven of Otto's third birthday party Danni was nowhere to be seen. On the other hand, she might have been the one taking those pictures.

Otto is very tan and of what may be slightly less than average height for his age. He wears his auburn-colored hair arranged high and tight in dreadlocks, kept in place with a headband, and wrap-around sunglasses worn all waking hours of the day and night. Otto favors a pale yellow v-neck t-shirt (which some have interpreted as actually being a soccer jersey, a possible homage to voice-actor Ashton's passion for soccer), burgundy corduroy walk shorts, and white basketball shoes with thick soles.

Otto is assertive, tough, confident, brave, yet very naïve. He has a habit of thinking of himself before others, and brags about himself all the time. He inherited his personality from Raymundo. He is unaware of when he hurts somebody, such as Violet Stimpleton and her flowers. Otto does not rule out opportunities to sell out and step on other people in his attempts to rise to the top. Reggie Rocket eventually makes him understand, but not without frustration. This results her siding with Sam while Otto sides with Twister Rodriguez. Other times he has to learn the hard way.

Arlene Klasky has stated in an interview that Otto was not based on any particular modern sports figure or other person, though a few fans have noted similarities between Otto and Jackie Cooper's eponymous character from Hal Roach's Our Gang/Little Rascals series. Another fan thinks that an Orange County surfer from the late 1980s named Wally Fox - who had curly hair and frequently wore a headband and shades - could have been an influence. Giving added weight to the latter theory is that Surfer Magazine staff member and RP tech consultant "Curious Gabe" Sullivan might have known of Wally in passing.

A very brief clip from the episode "Total Luger" shows Otto receiving attention from a couple of young girls around his age at the Shore Shack the night after the Street Luge race. Although some fans view the fact that Otto acknowledges them as evidence that he‘s interested in girls, there isn’t enough evidence in the show to support this speculation. It’s highly likely that he doesn't have time to think about girls due to his many athletic endeavors and competitions. Therefore, he most likely greeted those girls because he was simply high off of his ego after his big win.

However, in the episode "The Return of Clio", Otto and Twister's cousin, Clio, shared a gaze underwater after a few days of tension between the two of them. Fans speculate as to whether or not the gaze and the interaction thereafter was due to a budding romance or simply a newly resolved friendship. Because the writers never continued to allude toward anything between the two of them, the real answer remains unknown.

The unique pattern of the red helmet with white stripes that Otto wears appears to be based on a helmet line developed by Kanoa Surf with the help of Jay Adams in 1978. Called the "Kanoa® FlyAway®" and offered in a multitude of colors, they were one of the first safety helmets designed and marketed specifically for skateboarders.

(For more on Dogtown, Jay Adams, and the rest of the Z-boys check out Z-boys.com) 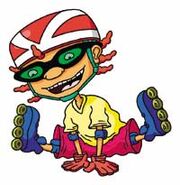 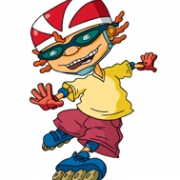 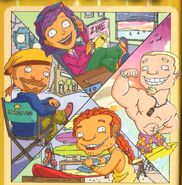