Just noticed this while watching Rugrats on nick reboot: 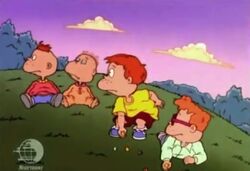 Fascinating! I don't recall this particular episode; what was going on? Did the boy have a speaking part? knoodelhed (talk) 05:37, September 20, 2013 (UTC)

Yeah, it was where someone dressed like Tommy stole that group's ball and they thought that it was actually Tommy. Looks like it might've been S05E09. Besweeet (talk) 15:31, September 20, 2013 (UTC)

Now I remember! It contained references to The Fugitive!

I know it may sound negetive, but someone has to say it.

Am I the only one who thinks Otto is complete and utter asshole!?! This guy always gets in trouble in just about every episode. If your reading this Ray, do yourself a favor and get rid of that idiot. And Otto, if your reading this, in the words of Kanji Tetsumi, "GET BENT!"Pof203 (talk) 05:59, July 21, 2014 (UTC)

Retrieved from "https://rocketpower.fandom.com/wiki/Talk:Otto_Rocket?oldid=9518"
Community content is available under CC-BY-SA unless otherwise noted.